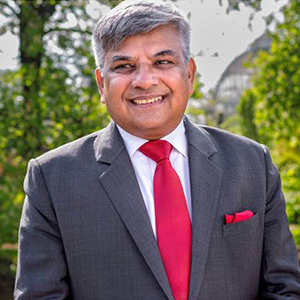 Kamal has been spearheading reputed Indian & multi-national organizations as President & CEO for two decades now. He is currently the President & Managing Director of Volvo Group, India, a role that he took on in April 2014.

Kamal is based in Bangalore, is an alumnus of IIT Roorkee, and has an illustrious career spanning 40 years, largely in automotive and engineering industry

In December 2019, Kamal was Knighted and awarded one of Sweden’s highest honours in the Royal Order of the “Polar Star: Commander” by Their Majesties, the King and Queen of Sweden for his untiring support to the Swedish commerce & industry in India.

Respected for his values’ based leadership and strong ethos, he is also the recipient of the prestigious “2019 Machinist Lifetime Achievement Award” by the Times of India Group for his outstanding contribution in the field of Manufacturing.

A thought leader, Kamal also wears governing council and board of director hats with distinguished institutions from industry, academia, and public sector, including the following

−Chairman of the Board, Swedish Chamber of Commerce India (SCCI)

−Independent Director on the Board of the Commercial entity of Department of Space, Government of India

−Member of the Board of Governors, Indian Institute of Technology – Gandhinagar

−Board Member of Xavier Institute of Management (XIMB) as well as a few other premium management institutions.