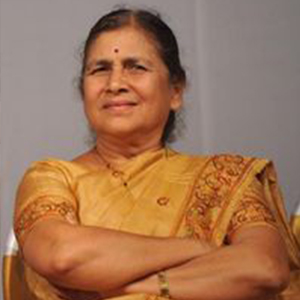 Dr Mandakini Amte holds and MBBS degree from Nagpur University. She serves as the Medical officer for Lokbiradari Prakalp, Hemalkasa of Maharogi Samiti, Warora, chain of Seven Tribal Projects devoted to the cause of Madia Gond Tribal of Dandakaranya Forest on the Borders of Andhra, Chhattisgad and Maharashtra states.

The LBP project is located in Hemalkasa near Bhamragad, in the Gadchiroli district in the state of Maharashtra, which is part of the Dandakarayna forest reserve; a lush green forest with a very low population density. The area is inhabited by the Madia Gond tribals. It is also physically separated from “civilization”, and consequently is not benefiting from the development money spent by the government. Dr Mandakini Amte along with her husband Dr Prakash Amte are rimming the project since 1974, forfeiting the opportunity of lucrative medical practice in urban areas. Under the project a hospital, a school, vocational traning centre is run. Through the LBP project the life saving irrigation techniques, diversity in crop farming, agricultural techniques were taught to local tribal population, which has led to the upliftment of the tribal population.

Over the years Dr Mandakini Amte has had to his credit several awards and accolades. She was awarded  Ramon Magsaysay Award for Community Leadership in 2008, Sheikh Hamdan International Award for Volunteers in Humanitarian Medical Services, Dubai 2010-11 and several more. A postal stamp was issued by The state of Monaco to honour Dr Prakash and Dr Mandakini Amte in 1995.