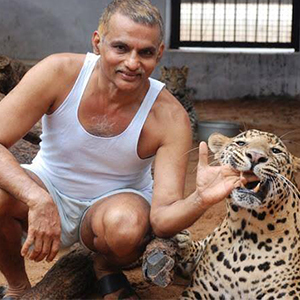 Dr Prakash Amte holds an MBBS degree from Nagpur University. He serves as the Medical Director for LokbiradariPrakalp, Hemalkasa of Maharogi Samiti, Warora, chain of Seven Tribal Projects devoted to the cause of Madia Gond Tribal of Dandakaranya Forest on the Borders of Andhra, Chhattisgad and Maharashtra states. DrAmte has been a torch bearer

The Lok BiradariPrakalp (LBP) meaning “A Project of People‟s Brotherhood” is a project of MaharogiSewa Samiti, Warora based at Gadchiroli district in the state of Maharashtra in India. It works for the welfare of the Madia& Gond tribals in the area. All the services like medical aids, residential school, agricultural help etc are provided totally free of cost to these tribals. Only the school part of the activities of LBP is supported by Government grant which is provides for only 75% of the expenses of school. The school meets the balance from public donations. All of the expenses for the 50 bedded hospital are met through charitable donations or grants from organizations like Rotary Club. This project was started by the legendary social worker Baba Amte in 1973 for integrated development of Madia- Gond. Baba‟s younger son Dr. Prakash Amte and his wife Dr. MandakiniAmte are running the project since 1974, forfeiting the opportunity of lucrative medical practice in urban areas. At the time of the establishment of LBP, literacy in the area was almost zero, and medical care was unheard of. What started with a single hut, and a school held under a tree has now become a campus with well equipped hospital, hostels for 250 girls and 350 boys with properly equipped school buildings. Today, with a multi-speciality hospital, a hostel school which has created engineers and doctors and livelihood opportunities for the tribes, LBP has got the Madia-Gonds into the mainstream.

Dr. Prakash Amte saved the wild animals from man’s cruelty by starting the ‘Animal Ark’, an animal orphanage that started with an orphaned baby monkey and has now blossomed into a home for leopards, snakes, hyenas. At one point the shelter also had a lion.

Over the years Dr Prakash Amte has had to his credit several awards and accolades. He was awarded Padma shree by Government of India is 2002. Ramon Magsaysay Award for Community Leadership in 2008. DrAmte has authored several books including his autobiography “Prakashwata” and other’s including “Ranmitra”, “Alokit Path”. Several documentaries of his work have been published including “Divine Messengers”. He has featured on IN talks, TeDx speaker.